Clann Choinnich, according to the oldest available genealogies, descend from a man called Gille Eoin, who was Lord of the Aird - probably in the 12th century. The Aird is the area on the south of the Beauly Firth, but the original lordship of that name appears to have included all the lands around the head of and on both sides of the firth and the river that flows into it [see Map]. Tradition has it that a progenitor of the MacKenzies was sent by the Earl of Ross, to the west coast to liberate it from the Norse, and that his descendants established themselves in Kintail at Eilean Donan Castle. The kindred to which they then belonged included the ancestors of the Mathesons as well as of the MacKenzies, with the chiefship being shared amongst collateral lines according to the old Celtic system of succession [see Ancestors & Kintail]. 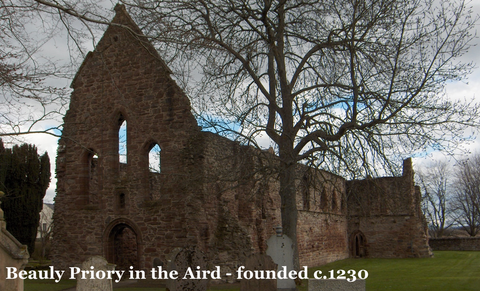 The Hebrides, which had been Norwegian since the late 11th century, were ruled by competing dynasties - Clann Somerhairle of Islay, and the Kings of Man. Many of the small clans in Kintail later attached to the MacKenzies - e.g. the MacBeolans, MacIvors, and MacTearlaichs - are said to have been of Norse origin [see Septs]. In 1263 the Earl of Ross and Coinneach mac Mathan, chief of the Matheson-MacKenzie kindred, attacked the Isle of Skye and provoked a retaliatory raid the following year by the King of Norway. This was repulsed at Largs in Ayrshire by King Alexander III to reclaim Scots' sovereignty over the Hebrides. According to 17th century clan histories, one of the king's supporters at Largs was the man who later saved him from a rampaging stag to earn the right to bear the cabarfeidh (stag's head) as his arms [see Legends].

The clan history summarised century by by century: