Cabarfeidh was born in 1948 and is the son the late Roderick Grant Francis Blunt-Mackenzie, 4th Earl of Cromartie, and his second wife Olga Lawrence.

He was educated at Rannoch School, Perthshire and at Strathclyde University, Glasgow, and became an explosives engineer - being registered as a Member of the Institution of Explosives Engineers (M.I.Exp.E.).

On the death of his father in 1989 he suceeded to the titles of 5th Baron Castlehaven, 5th Viscount Tarbat of Tarbat, 5th Baron MacLeod of Castle Leod, and 5th Earl of Cromartie, as well becoming the Chief of Clan MacKenzie.

He is a keen mountaineer and, as well as having served as a Member of the Mountaineering Council of Scotland, he is the author of "Selected Climbs in Skye" which was published in 1982.

He's a member of the Standing Council of Scottish Chiefs and the Scottish Clan and Ancestry Forum (a body that advises the Scottish Government on clans and ancestral tourism).

He is married to Eve and has two sons by a previous marriage: Colin, Viscount Tarbat (born 1987), and Alasdair (born 1989). To contact the Chief please see the Castle Leod website here.

The Chief and His Family
Cabarfeidh with Alasdair, Eve, and Colin, at the International Gathering in 2015 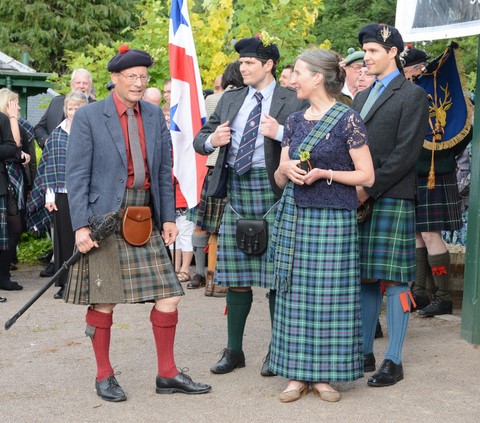