Following the success of the first Clan Parliament, a second such gathering was held in 2000 which, in addition to the normal talks, tours and dinners, included a special event - a formal reconciliations with old rivals the Munros, featuring a torchlit march together into Dingwall where the chiefs toasted each other's clans. In 2012 a new history of the MacKenzies, "May We Be Britons", was published by Andrew McKenzie and made available through the Scottish Society [here], which now has members all over the world. New clan societies have been created in France and Germany, and members from all the societies come together in Scotland every five years for international gatherings. The 2015 gathering featured another reconciliation - with the MacDonalds, who participated in a seminar about the battle of Pairc, marched into Strathpeffer for a chiefly exchange of swords, peacemaking toasts, and finally a ceilidh of the clans at Castle Leod. See Societies. 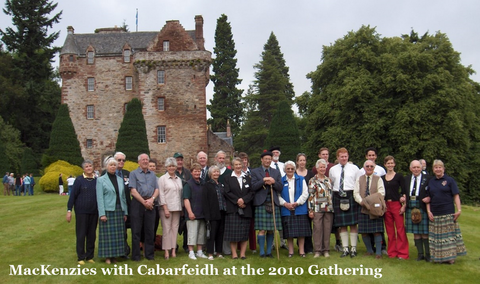 Work on the restoration of Castle Leod continues - including the conversion of some rooms to provide an apartment for visiting MacKenzies to rent for holidays - and in the long term it's hoped to have a Clan Centre at the castle. Tours can be arranged for visiting clanspeople, in addition to the normal open-days [see the castle website]. The Clan MacKenzie Society of Scotland is busy converting itself into a more business-like body with updated membership procedures and ambitious plans for a new website. The Earl of Cromartie's son Colin, Viscount Tarbat, is taking an increasingly active interest in the clan, and Cabarfeidh himself travels abroad to visit overseas members of the clan whenever he can. The Seanchaidh, Graeme Mackenzie, also travels extensively in North America - and has twice visited Australia & New Zealand - speaking to MacKenzies and giving advice on genealogical research, which is a key component of 21st century clan membership. See Clan Seanchaidh.

The clan history summarised century by by century: